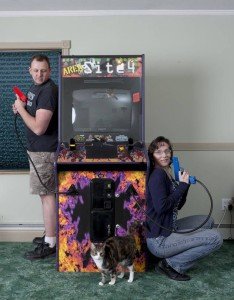 The Wall Street Journal, in an article entitled ‘But You Never Said…’ Why Couples Remember Differently, takes up this issue and provides some interesting support for the real existence of such a problem.  It describes how a person’s mood at the time of an event and their feelings about it can affect their memory in different ways.

It’s a potentially thorny problem I frequently see in the therapy room: a couple will come in and one party will begin telling me their story as s/he sees it.  The other party will then follow up – or, more often, interrupt – to explain how “that’s not what happened.”  She didn’t tell me, I didn’t say that, he did this, she refused to do that, and so on. So let me apprise you of the following unfortunate truth: I will never know which one of you is right and which one is wrong.  (As the article points out, there is no reason to assume either party is willfully lying – you’d be surprised at just how far memories can be distorted from what actually happened without the rememberer being any the wiser.) I am not a detective or a prophet, and I have no tools to discern who is correct in this situation. And any therapist who tries to ferret out the true details of the story is not doing his or her job – because it’s not our job to establish exactly what happened (even if we could).  My job as a couples counselor is to help you get your relationship where you want it to be. And even if I were to magically divine what happened in this instance, it is guaranteed that there will be a next time anyway.  People forget, misconstrue, etc. It’s going to happen. And you can’t come back to me every time to pass judgment on who is correct. And even if you could, it sure wouldn’t help your relationship.

So what do I do when faced with conflicting reports? My job is to get underneath the factual argument and understand what is going on for you emotionally.  Maybe he didn’t tell you how to eat your spaghetti right, but if you have a general feeling that your husband or boyfriend is too controlling, then it doesn’t really matter.  We need to address why in a global sense you are feeling that way.  It may be that you have a controlling partner, whether or not the spaghetti incident was a good example of it; or it may be that you are hypersensitive to people’s legitimate input.  It needs to be figured out.  And that’s something I can help you do.

Note that if two people come in and they can’t agree on anything that has happened – he insists that he has never said anything that could be interpreted as telling his wife what to do and she swears that he bosses her around every single day – then we have a deeper problem at hand, viz., a wider rift which needs to be resolved. The memory of any specific incident is much less important at this point, and the process is probably going to take longer. But there is always hope for improvement even in this kind of case.

In sum, don’t get bent out of shape when you and your partner disagree about what did or didn’t happen. It’s a normal thing, and you can have a perfectly loving relationship even if you never comes to agreement on what color shirt he was wearing that night at grandma’s house.