I’ll tell you a story.

This story happened right around an hour ago. And I thought it was a good illustration of one of the principles I routinely teach about parenting, namely, distraction. With young children, distraction is usually the first choice for intervention techniques in high-stress moments. To wit:

My wife just came out of the kids’ bedroom at 8:15, with the kids still not asleep well past their bedtime. She was exhausted and feeling somewhat ill. She looked at me with exasperation and said, “Our three-year-old is on the verge of another tantrum [she had put on a good 45-minute one earlier in the evening]. She wants juice. If we don’t give her juice, she’s going to have a major tantrum.” This was one of those times where it was sorely tempting to give in to our preschooler’s blackmail. My wife needed to go to sleep; I had a client to see in 15 minutes. A tantrum really did not fit into the schedule. “I’ll handle it,” I said confidently, not having a clue how exactly I was going to do so.

I strode into the room and sat down in the rocking chair by the bunk bed, the bottom bunk of which was occupied by a whimpering three-year-old girl sucking her thumb. In the seconds it took me to walk from my room to theirs, I was struck with inspiration. “Sweetheart,” I began, “Mommy tells me you want a moose.” No reaction. “I can’t give you a moose. I don’t have a moose. A moose is a big animal. If you want a moose, we’ll have to go to the zoo, or 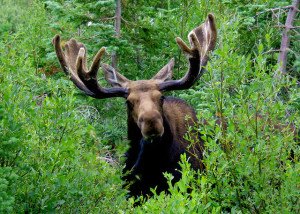 Canada or something.” She turned her eyeballs ever so slightly in my direction. “So I can’t get you a moose, okay?” She’s definitely looking at me by now. “Do you know what a moose looks like? It’s a big animal, about as big as a cow, except it has antlers-“ “like a deer!” piped in the elder child from the above bunk. And then – the whimperer spoke: “A moose is a big animal?” “Yes,” I responded, “that’s why I can’t get you a moose. Sorry. But you know what? I have a story about a moose. Here, let me tuck you in with your blankie just liiiiike this. You see, once I was at camp in a state called Maine, which is at the very top of the United States…” And thus did I transition into another important parenting tool: the Story from Your Childhood. More on this another time.

The point is, the distraction technique worked as well as I could possibly have expected. It allowed me to deftly sidestep a major power struggle, which really ends with everybody losing, no matter who wins. I had been rather apprehensive, because I really wasn’t expecting such a successful outcome, and I hadn’t yet figured out what I was going to do if she protested, “Not moose, JUICE!” which is really what I had anticipated. I was ready to go on with “You want a GOOSE?” followed by “You want a CABOOSE?” but I was pretty confident that that was going to lead to a breakdown somewhere in between goose and caboose.

But the truth is, you really can’t predict kids, can you?

This entry was posted in Blog and