Recently I had a conversation with a client about patience.  He was working on trying to be more patient, especially as it related to the people in his life, and found himself losing his cool more frequently than he wanted.  This led to an important discussion about the meaning of patience which I thought was worth sharing with a broader audience.

Google, which is basically modern man’s Webster, defines patience as “the capacity to accept or tolerate delay, trouble, or suffering without getting angry or upset,” and then follows it up with the endearing example, “you can find bargains if you have the patience to sift through the dross.” I am not sure I entirely agree with this definition, but since I am a therapist and not a linguist I will reserve the right to share my perspective without having to take on the dictionary establishment.

To me, patience indicates an ability to wait, which I think is captured by the words “accept or tolerate delay.” However, I don’t know that tolerating suffering counts in my book as being patient.  Someone who is chronically ill and has accepted that fact may have achieved significant personal growth, but I don’t think that’s quite the same as patience. 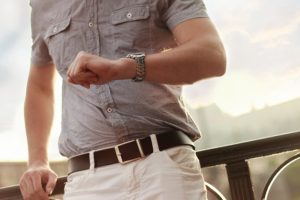 Patience, significantly, means waiting for something you expect to happen.  Expect is the key word.  Nobody is patient waiting for a million dollars to fall into their lap because they don’t expect it to happen.  Patience is waiting for the weekend so you can go fishing.  Patience is saving up for years to be able to afford a house. But patience is not staying at a job where the boss is known for years to be a jerk if there is no reason to expect he is going to change.  That is foolishness – or perhaps just the best option given difficult circumstances – but it’s not patience.  The only reason one would patiently sift through the dross is because one does expect to find a bargain; if one did not, one would be ill-advised to do any sifting.

My client was waiting for his wife to become a more organized person, for his mother to offer more warmth, for his job to be less demanding – but there was no reason to expect any of these were going to happen. His wife suffered from ADHD and in the best case was not poised to become a highly organized person. His mother had been cold all her life. And his job was a in particularly stressful industry.  The problem is not that he wasn’t patient enough; it’s that patience is really not what one ought to strive for when change is not likely to happen.  Of course, having realistic expectations is a vital part of this.

If your spouse speaks to you unkindly, you can certainly hope for them to change their ways (especially if you seek intervention in the form of marriage  or other avenues).  But if your spouse has certain personality traits – social, introverted, intellectual – these are unlikely to change, and it would be foolish to expect them to.  If you are married to someone with a stable character trait like these, the option is to learn how to live with it – perhaps employing certain strategies, compromises, or other measures – or to decide not to.  Can a person with ADHD turn into an organized person?  Unlikely. Can they become more organized? Probably.  But if you are waiting for things to be markedly different in an area where change is not likely, you are doing yourself a disservice.

Patience requires being real about what is and is not changeable.  This question itself could take up many volumes – and indeed it has – but as a first step, introspection is a good place to start.  Think about the parts of yourself you could never see changing. Are you a laid-back person? Do you cringe when you think about trying to live on a rigid daily schedule? Are you generally solitary, and prefer to avoid large crowds? If so, could you really imagine yourself being the kind of person who thrives on frequent, large social events?  Some parts of you are just who you are and will probably never change; this is just as true of others and expecting any different is unproductive.

Being patient while your loved ones work on their manners, their communication styles, their anxiety – that is a wonderful virtue.  Being “patient” while waiting for someone to change who they are is just an exercise in frustration.

This entry was posted in Blog and Tags: relationships